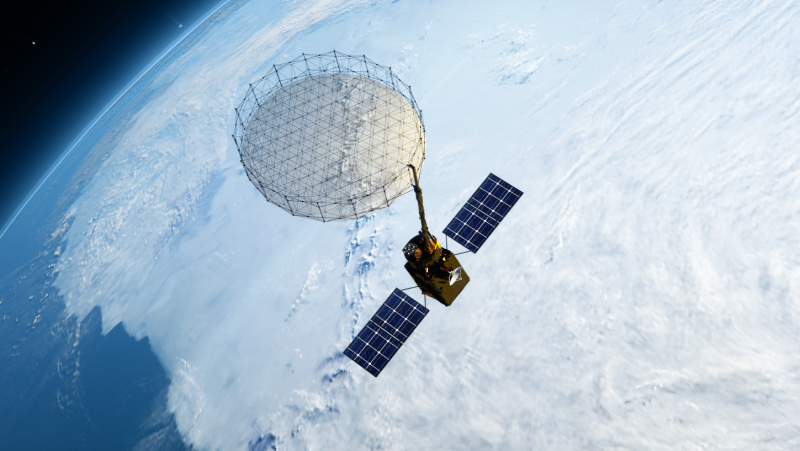 By Jens Janke on 3. December 2020in Common, Companies, Politics

It is official today, 02.12.2020: Europe is going to develop a new independent technology in the European space sector. Thales Alenia Space Italy has been selected by ESA and the European Commission as the Satellite Prime for the Copernicus mission CIMR contract. At the same time, HPS Germany, as leader of an SME-oriented consortium of 15 companies from seven countries (main partners are LSS, vonHoerner&Sulger and RUAG), were selected to develop the “Large Deployable Reflector Subsystem” (LDRS) called “LEA-K8r”. This large, 8-meter diameter reflector will be deployed in space and rotates about a non-symmetrical axis: a world first! Today, with this contract signature, HPS and the European consortium have been authorized to start the development with the phases B2/C/D.

The CIMR-mission, in the context of the Copernicus Earth Observation Programs of the European Commission, provides a significant contribution to the „Integrated European Policy for the Arctic“, whose objective is an improved understanding of the effects of climate change, especially in the Arctic region, and thus will establish key requirements for the Arctic communities. The CIMR-mission will provide improved continuity (sub-daily) in the monitoring of floating sea ice in terms of spatial and temporal resolution. In addition, the instruments will provide global coverage of sea surface temperature measurements, but with a specific focus on the Polar Regions.

Authorized was now the first tranche with 23.0 MioEuro for Phase B2, with an HPS-share of 7.1 MioEuro for two years. In total, the Phase B2/C/D/FM2 contract amounts to 110 Mio Euro until the PFM Satellite launches in 2027 and until the delivery of the FM2 LEA-reflector-subsystems in 2028. The share of HPS Germany values to 26 Mio Euro, which results in an average of 3.2 MioEuro per year, and which assures 15-20 high quality jobs.

HPS CEO Ernst K. Pfeiffer commented: “We are all very pleased to be able to make an active contribution to European non-dependence in an area of critical technology as a subcontractor to TAS-I, and to be able to assume global technology leadership with the innovation of an unprecedented rotating 8m Ka-band reflector subsystem in our portfolio. On behalf of the WeLEA-consortium, I would like to thank all those in Germany and throughout Europe who have supported our ten-year journey to this strategically, politically and technically magnificent position.”

The first phase, B2, includes the detailed design of an EQM. Central to this effort is an intensive breadboard test program, which will raise the few remaining critical elements of LEA to Technology Readiness Level (TRL) 5 within 6 months. As an example, a Ka-band mesh, the “European Space Mesh”, is being developed and produced by the new HPS/IPROTEX joint-venture “HPTEX” along with cooperation from Frauenhofer ISC, in Upper Franconia. Since this metal mesh needs to have an optimal design with respect to electromagnetic wave reflection and mechanical stretch parameters, intensive parameter studies are currently being undertaken. Promising initial results have already been achieved in pre-development.

And our next goals are already in sight: Hydroterra, ESA’s EE10 Candidate Mission which requires a deployable reflector of at least 7 meters in diameter; SENTINEL-1 NG Mission, requiring a single large reflector; and a Ka-Band Internet Broadband mission with 5-metre reflectors.

In addition to large deployable reflector subsystems, the main product lines of the HPS portfolio are classic 1-2 meter reflector antennas for science missions (e.g. Euclid & HERA) and telecommunication missions (e.g. Heinrich Hertz), as well as the world’s only operational product series of serially-manufactured satellite-de-orbit systems under the brand name “ADEO” for decommissioned satellites. By the end of 2021, the HPS Group, consisting of HPS Germany, HPS Romania and HPtex, will grow at least up to 100 employees.