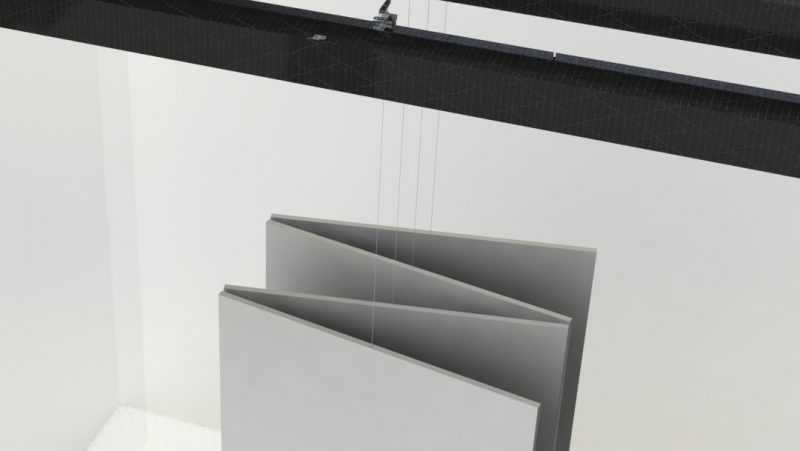 By Jens Janke on 1. Februar 2021in Allgemein, Unternehmen

Supported by the ESA GSTP, STI today reached the next milestone with the start of the verification process of a 5-hinge-axes solar array deployment system, as will be used for the Copernicus expansion satellites, on a Zero-g robot (called “ZeroG”). Qualification is planned to be completed mid 2021.

Efficient power generation is a key factor in satellite development: High performance satellite instruments and platforms often have high power requirements that can only be generated by big surface solar arrays. Due to limited launcher capacity and excessive loads during launch, the solar array panels of most satellites need to be stored in a small volume during launch and are deployed after separation from the launcher. Depending on the required power the deployment mechanism contains one or more hinge axes. While single-hinge deployment mechanisms can be relatively basic spring-driven mechanisms, multi-hinge deployment mechanisms are typically complex mechanisms containing motors and cables that perform a slow and synchronized deployment of the solar array wings. Unfortunately, these designs tend to be heavy, reliability critical and expensive.

A new approach to multi-hinge deployments

After having developed, built and delivered a range of body fixed and single-hinge solar arrays, SpaceTech (STI) has started the development of a new type of multi-hinge deployment mechanisms some years ago. This development resulted in the controlled unsynchronized deployment mechanism concept relying on C-spring hinges with torque-limiters to achieve a robust deployment into a defined deployment corridor. It significantly reduces the deployable solar array wing complexity, weight and cost. STI has successfully applied the design in several activities, both for institutional and commercial missions. Perhaps most prominently are the 1800 solar array deployment mechanisms that we deliver to OneWeb, 220 of which are already in orbit. Half a year ago, STI delivered the first solar array with 5 hinge axes for Momentus smallest satellite “Vigoride”. Also, mid 2020, STI was selected by Thales, Airbus and OHB to provide the solar array wings for the EU Copernicus Expansion Satellites CHIME, CO2M, CRISTAL and LSTM, also with up to 5 hinges axes, but significantly larger panels. This indicating that our designs are not only cost efficient, but also meet the highest space mission standards.

One of the challenges of the controlled unsynchronized deployment mechanism is to ensure a safe deployment under all mission scenarios. This requires a high level of system design understanding and modelling of the specific design and environment during deployment. In addition, the verification of such a fast deployment requires new approaches for a ZeroG test rig that is capable to provide realistic g-compensation during different deployment scenarios for a wide range of solar array wings from 1 to up to 5 hinge axes.

One of the key pieces of the puzzle to the STI multi-hinge development is the unique zero gravity testing robot ZeroG by SpaceTech’s innovative daughter company, CarboSpaceTech. Unlike traditional g-compensation measures, like rigs with long cables or Helium balloons, which are severely limited in dynamic situations, ZeroG is able to actively react in real time to the movement of the test object. Thus eliminating the impact of gravity with multiple, independent manipulators – one for each of the connected solar panels.